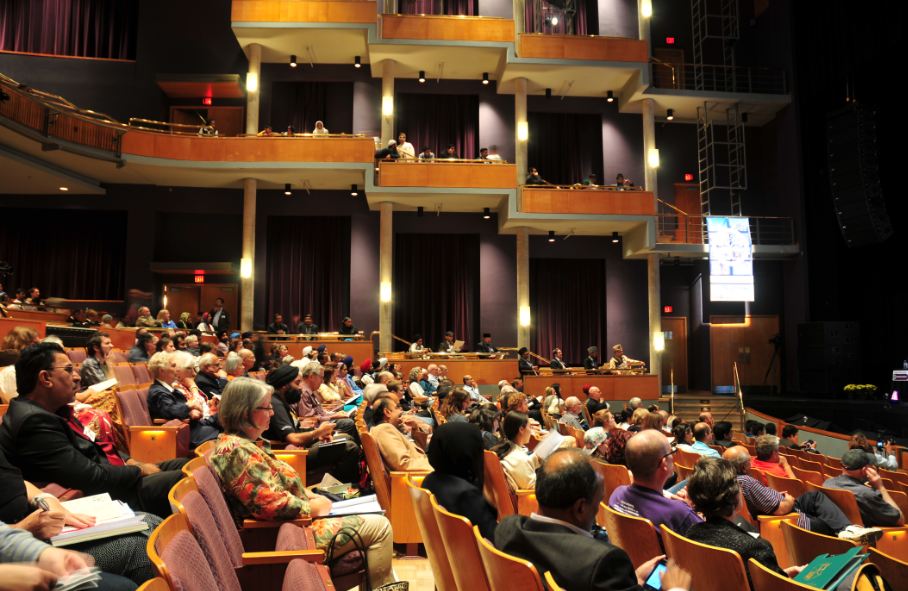 The 34th World Religions Conference was held on Sunday, September 28, 2014 at the River Run Centre, Guelph, Ontario, Canada. Scholars from various religions and philosophical traditions were invited to participate.

The World Religions Conference (WRC) is a multi-faith event which brings together well-known scholars from the world's major religions to speak on a common topic from the point of view of their respective religious traditions. For thirty years, the WRC has served as an invaluable forum for different religious and ethnic communities to gather in the spirit of tolerance, peace, cooperation, and understanding. The WRC serves the noble purpose of educating members of the community regarding interesting and relevant topics by providing a platform where all major religions can pool their collective wisdom and teachings regarding the topic. Continually on the rise in terms of organizational standards, quality of content, and attendance, the WRC has become the largest multi-faith event of its kind in Canada.

With free admission and lunch, and a great chance to learn and meet others from a multitude of faith and philosophical communities, it is a small and simple step by which to make this world a more peaceful and tolerant place

The theme chosen for 2014 conference was:

The world is passing through turbulent times. Crises throughout the globe continue to manifest newer and graver dangers almost daily. The current situation of the world, with its increasing uncertainty and instability, seems to be moving us towards some sort of global conflict, which could come in the shape of an unprecedented world war. There is an overwhelming sense that things are quickly getting out of control and that people are looking for someone to step forward on the global stage to offer concrete guidance to lead humanity on a path back to security and stability; a path that speaks to their hearts and minds alike and gives them hope and confidence that there is a path that can lead to practical and sustainable peace, at every level of human existence, individual, societal and international.

The objective of the conference is to bring scholars and leaders from different faith groups, religions, and philosophical traditions together in a spirit of peace, mutual understanding and respect exploring the Pathway To Peace.

As always, we confirmed scholars from various religions and philosophical traditions to speak at the event.

The event aims to explore the teachings and practices of different religious and philosophical traditions, with the hope that such mutual exploration will encourage better understanding and promote harmonious co-existence among the members of Canada's cultural mosaic.

The entire process of the organization of this event includes inter-faith interaction and therefore promotes interfaith respect, harmony and inclusiveness. It inculcates mutual understanding, respect and cohesion among all people of different faith traditions and philosophies of the world.

(a) Opening Session: Opening Ceremony, Introduction to this year's theme, Introduction by the speakers of their respective faiths (3-minutes each) followed by greetings from dignitaries

(b) Theme Session: To discuss the topic wherein each speaker will be given 12 minutes followed by a 4-minute religious or cultural singing presentation by a members of the faith group.

(c) Concluding Session: A 35-minute interactive session to allow speakers to respond to questions from the audience.

Brunch, a hot lunch and refreshments were served at the conference venue.

The whole event was streamed live on the web.