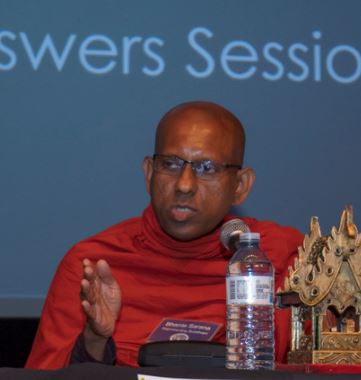 Answer: All faiths should positively encourage and educate their disciples and the communities the importance of following five precepts without breaking them.

Question 3: How do you shave your head so smooth? Any tips or recommendations? Also why do Buddhist priests shave their heads? By Bryan Thorpe

Answer: When monks shave their hair, they do not need to think about combing their hair or any kind of hair styles. Monks can use that time to meditate or learning the teaching of the Buddha. Also, Buddhist monks gave up the desire for their hair too when they became monks as per Buddha’s advice.

Question 4: How would you explain about the differences among people (i.e. some poor, some rich, some beautiful some ugly) in regard of God as the creator?

Question 5: What is the religions attitude towards homosexuality and the gender spectrum? By Azura

If someone can practice celibate life with four precepts or training rules, Gender spectrum is negligible.

Buddha never accepted or motivated killings any beings even a small creature. Buddha explains in this long journey of death and birth (which is called Sansara) he couldn’t find to his divine eye any creature in this world  was not our close relative such as father, mother, step mother, step father, brother, sister, aunty and uncle etc. All are related to us in our previous lives.

Question 7: Although our understanding of God may differ, are we all looked after and received by the same God?

Question 8: How does Buddhism define “sexual misconduct” so that one may abstain from it? By Bella

One should follow the training rule or precept by not engaging sexual conduct with someone else other than married husband or wife.

Question 9: [Twitter Question] What is responsible for deciding whether our actions warrant good or bad karma. Surely each human action lies on the spectrum of morality and it can be difficult to determine if some actions are good or bad as philosophy has said for centuries. By Omar Khan