GUELPH—Members of the world's leading religions will gather at the River Run Centre next month to join in prayer and reflection about the freedom of religion.

The 33rd World Religions Conference will be held in Guelph for the first time after being hosted in Waterloo for the past seven years.

Nabeel Rana, chief planning coordinating officer, says there are few events like the conference where so many different people come together without any negativity.

"Canada is multicultural but there aren't many events like this one where all the faiths, cultures, nationalities come together," says Rana.

CBC journalist Matthew Kang will moderate the Oct. 6 event, which will include readings from holy scriptures, messages from local, provincial and national leaders, and presentations from guest speakers.

Religious speakers will each have about 13 minutes to discuss their perspective on how founders practiced and taught religious freedom. Sikhism, Humanism, Judaism, Hinduism, Buddhism, Islam, Christianity and Aboriginal spirituality will be represented at the event.

Rev. Kathryn Gorman-Lovelady, a minister, shaman, and elder of the Métis council, will speak on Aboriginal Spirituality. She says the ability to be able to speak with leaders of other faiths is worth the while.

"It's wonderful to council with people who have a high vision of their faith and want to council peacefully," says Gorman-Lovelady, a resident of Tiny, Ont., and graduate of the University of Guelph.

Gorman-Lovelady says educating others on aboriginal spirituality is her priority at the conference.

"Education is the priority. It's helping to understand that there's no single Aboriginal spiritual basis. We don't have one particular founder, we learn from our ancestors. Residential school issues are ways the intergenerational teachings have been broken. We're looking to move past that and refocus."

Shafiq Khan, public relations officer for the event, says the conference was created by the Ahmadiyaa Muslim Community that attends the Baitul Islam mosque in Vaughn. The Ahmadiyaa division of Islam rejects radical teachings and believes Hadhirad Mirza Ghulam Ahmad to be the prophet of their time.

Creating the conference was a way to follow the teachings of Ghulam Ahmad who preached equality.

"This religious conference goes through his teachings that there's no difference between us all," says Khan. "The purpose is to bring all faiths together and create a platform for the community. Arabs don't possess superiority over non-Arabs and (vice-versa)."

The first World Religions Conference was held at Briar Park School, in Brantford, in 1981. The vent has also been staged in Kitchener.

Khan says the event is growing every year and he expects 800 to 1,000 guests at the River Run Centre.

The River Run Centre opens its doors at 10 a.m. on Oct. 6. The conference is free to attend and complimentary parking and lunch will be offered by the hosts.

This email address is being protected from spambots. You need JavaScript enabled to view it. 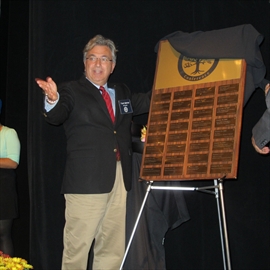 Quebec's separatist government is proposing a "charter of Quebec values" banning civil servants from wearing religious symbols on the job.

"We're very concerned about this," said Uppal, a Sikh. He assured the audience of under 800 at the River Run Centre that if Quebec's Parti Québécois pushes such a bill, the federal government will oppose any religious discrimination found within.

"We in Canada promote religious freedom," Uppal said, stressing the country is a global leader in human rights. He cited the recent creation of the Office of Religious Freedom in Canada, which he described as denouncing violence against religions and advocating on behalf of victims.

Guelph MPP Liz Sandals also stepped into the fray when invited to say a few words.

She assured audience members her government would not consider any law similar to the controversial Quebec initiative. In fact, she said Ontario political parties are united in opposing the Quebec proposal.

Uppal and Sandals were speaking briefly at the 33rd world religions conference by the Ahmadiyya Muslim Jama'at organization, held in Guelph for the first time after years in Waterloo.

Featuring a panel from diverse religious backgrounds, the gathering sounded at times like a love-in as speaker after speaker called for religious tolerance around the world.

But in a lunch break, audience member Gaura Das, a Toronto Brahman priest, pondered the significant divisive acts of violence like the spate of recent attacks against Christians and their churches in the Middle East.

"They give a bad rap to religion and spirituality," Das said, suggesting the perpetrators have stepped beyond the bounds of their religions.

"We need to create alliances."

That was another common theme among panellists at the conference, moderated by area CBC journalist Matthew Kang.

Respecting the inspirational foundations of religions "is the only way to promote peace in the world," Ahmadiyya Muslim Jama'at Canada national president Lal Khan Malik said in opening remarks at the conference organized by his group.

The divine "is for everyone," added Sikh panellist Balpreet Kaur of Ohio. "There is only one divine being." And the thrust is equality and justice "for all." The many religious paths to spirituality and enlightenment are all legitimate, Kaur said.

Non-religious humanist Doug Thomas of Elmira, however, urged people to pursue evidence-based beliefs. He said freedom of religion is acceptable as long as this includes freedom "from" religion for non-believers. He questioned the belief of some that people need to worship gods to be moral beings.

People can practice the religions of their choice "as long as they don't harm others," Jewish Rabbi Dow Marmur of Toronto stressed.

"Unfortunately, many of the Muslims have forgotten this," he said, lamenting the recent bombing of Christian churches.

But Nazir added others want to eliminate this interreligious strife.

"We are trying very hard to bring religions together," Nazir said.

"All of us are looking for freedom," Buddhist Venerable Jue Qian said, adding it can be achieved by "purifying the mind." Freedom "is inside of us."

For Toronto Christian Don Posterski, religious harmony requires given others the space they need "to be true to themselves."

Aboriginal Rev. Kathryn Gorman-Lovelady from Tiny, Ont. said she had a difficult time growing up as a Native in Guelph, but the spirituality of the Aboriginal community has much wisdom to contribute to the debate on religious freedom.

"We are more alike than we are different," said MPP Sandals, the provincial education minister.

This email address is being protected from spambots. You need JavaScript enabled to view it.